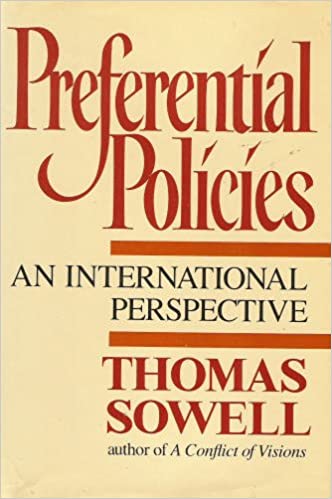 In this volume, Sowell conducts a cross-cultural analysis of government-mandated preferential policies. His sweep includes programs which have been implemented in developed and undeveloped countries for minority and majority segments of the population. Two things are certain: Sowell will be criticized for casting too wide a net, and his conclusions will generate controversy and discussion. Among his findings are that preferential policies often disproportionately aid the relatively most fortunate in a targeted group; that "temporary" preferential policies usually expand the scope of their coverage and become permanent; and that fraudulent claims are endemic to such efforts. Most importantly, Sowell contends that these problems occur because the programs themselves are designed for political expediency rather than long-term societal change. Scheduled to be serialized in Commentary magazine, this book is recommended for all political/social science collections.

4.5 stars on Amazon
Buy on Amazon
Twitter Over 1M followers