Dismantling America: and other controversial essays
by Thomas Sowell 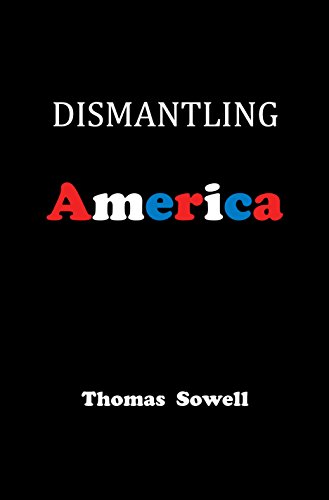 These wide-ranging essays -- on many individual political, economic, cultural and legal issues -- have as a recurring, underlying theme the decline of the values and institutions that have sustained and advanced American society for more than two centuries. This decline has been more than an erosion. It has, in many cases, been a deliberate dismantling of American values and institutions by people convinced that their superior wisdom and virtue must over-ride both the traditions of the country and the will of the people.

Whether these essays (originally published as syndicated newspaper columns) are individually about financial bailouts, illegal immigrants, gay marriage, national security, or the Duke University rape case, the underlying concern is about what these very different kinds of things say about the general direction of American society.

This larger and longer-lasting question is whether the particular issues discussed reflect a degeneration or dismantling of the America that we once knew and expected to pass on to our children and grandchildren. There are people determined that this country's values, history, laws, traditions and role in the world are fundamentally wrong and must be changed. Such people will not stop dismantling America unless they get stopped -- and the next election may be the last time to stop them, before they take the country beyond the point of no return.

4.6 stars on Amazon
Buy on Amazon

Freedom ultimately means the right of other people to do things that you do not approve of. view tweet

No one will really understand politics until they understand that politicians are not trying to solve our problems. They are trying to solve their own problems—of which getting elected and re-elected are number one and number two. Whatever is number three is far behind. view tweet

People who have achieved success are often referred to as “privileged,” especially by the intelligentsia. Achievements used to be a source of inspiration for others but have been turned into a source of grievance for those without comparable achievements. view tweet
Twitter Over 1M followers